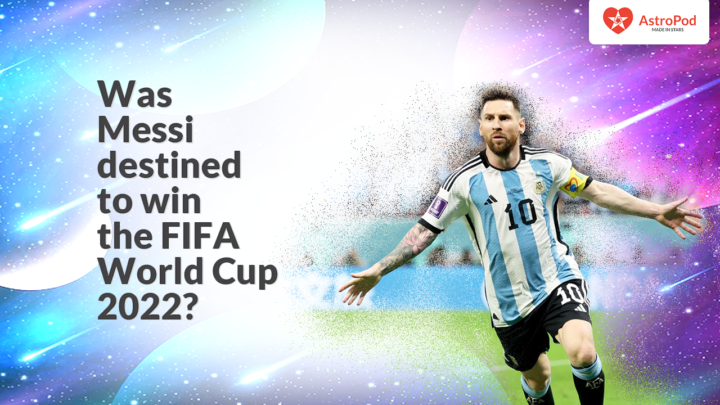 The seven-time Ballon d’Or recipient and Argentine Captain, Lionel Andrés Messi finally clinched that elusive World Cup trophy, another win for Argentina after thirty-six years, after beating France in the sensational final. He emulated his hero Maradona by winning the World Cup Championship and helped the nation’s dream come true as their last time world cup championship was collected in 1986.

But, was it written in the stars that Lionel Messi is destined to lead his country’s team to win the world cup title?

Here is what astrology says…

Lionel Messi is born Capricorn rising with Shrawan nakshatra on the ascendant. Shrawan nakshatra is symbolized by “Ear” whereas Shrawan is translated as “Hearing”. Shrawan nakshatra native is endowed with attentive listening and retentive traits. They listen carefully, attentively, and empathetically whereas they are quick at absorbing knowledge and skills. This could be one of the reasons he possesses such sublime football skill whether it be the precise control of the ball or readily threading his way through the packed defense, his play is always unbelievable to the eyes.

Messi has Venus as lord of his tenth house (House of Profession) conjunct with the exalted Moon in the fifth house (House of Hobbies & Passion including playing sports). Here, the connection between the fifth house of passion and the tenth house of the profession in Messi’s chart does give clue that he is to successfully convert his passion into a profession or he is to have a hobby-based profession. To add more, the sixth house which is associated with challenges is occupied by three influential planets namely Sun, Mercury, and Mars. This combination of the aforementioned planets in the sixth house (house of challenges) imparts Messi with strong willpower and determination to overcome any sort of challenges & setbacks in life and claim victory over competitors.

Jupiter which is responsible to impart Luck in a native’s life is well aligned in the fourth house of Messi’s birth chart which implies Jupiter has its good luck bestowed upon him to achieve happiness in life through his dedication and good effort. Jupiter has this expansive quality that imparts a native with an extended attentive capacity to focus on things enabling one to grasp matters of things quicker.

Lionel #Messi says he will not retire from international football after captaining #Argentina to a first World Cup trophy in 36 years.
“I love football, it’s what I do,” he said. pic.twitter.com/Z188Zy2AxP

Observing the ninth house of his natal chart which is associated with Luck & Destiny. As per his natal chart, Ketu resides in the ninth house of luck & destiny. This placement of Ketu is considered auspicious and fortunate as it blesses natives with splendid luck and tremendous positivity in life. As a result, Messi has luck highly favoured him to experience fortune, dignity, and prosperity in life. His destiny has stored him for the loftiest achievement in life.

Scrutinizing his third house, Rahu-the king of ambitions & obsessions occupies the third house. Rahu’s placement in particular houses and signs makes natives obsess over the house. This implies winning the biggest prize in football, World Cup was his obsession.

Checking his running Dasha during the FIFA World Cup 2022, Messi’s terrestrial life was under influence of Rahu Antardasha of Rahu Mahadasha. The Rahu-Rahu Dasha is likely to avail him of desired outcomes for all the hard work he had sowed in his career ambitions. As a result, since Lionell Messi was under the favorable domain of the Rahu-Rahu period during the FIFA World Cup 2022, he was to seal glory and bring pride to his country.

However, one thing about Rahu is, it loves drama. And how Argentina succumbed 1-2 to Saudi Arabia in the very opening match was truly the biggest upset in world cup history as if it was a drama. And even rewinding the World Cup 2022 Final Match: Argentina vs France, which all the way went out to the penalty drama despite Argentina leading the score by 2-0 till the 80 minutes of the game. Hence, the dramatic loss to Saudi Arabia in the opening match to the dramatic final win over France does point toward Rahu playing a pivotal role in Messi’s fall but bouncing back as well for the way he rises from the ashes like a phoenix in this World Cup 2022. All in all, Messi was under the right Mahadasha (Rahu-Rahu dasha) during this FIFA World Cup 2022 to reap the fruits of luck & destiny and attain glorious heights in his career.