Which Asta Lakshmi are you blessed with in your life as your love partner? 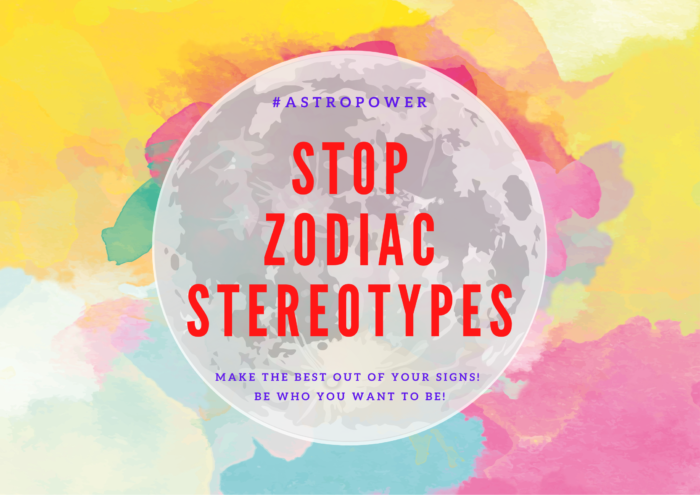 Have any of you ever wanted to give that savage reply to those people, especially, with their baseless stereotyping about you? The generalized belief of certain categories of people may be effective in the quick decision in certain situations like job interviews, selections, etc. however indeed things can’t be turned blind to those stereotype threats it poses and the mental & emotional hurt it causes to a certain degree. And neither zodiac sign seems free from stereotype whereas giving my own example of how being an Aquarius, I  am being stereotyped as cold and unemotional. Though it urges me that I have to be vocal about it, nonetheless, my Aquarian energies restrict me from wasting my energies on explaining to them when I have the choice to work on building my own craft.

Well, let’s see how the people with their zodiac sign would be vocal about those negative stereotype people have:

We, Aries, are proud to say boldness & confidence is our invisible crown but to anyone out there misunderstanding us as cocksure and full of ourselves, it’s not our fault to be born a leader and brave. Leadership instinct is endowed in us which at times can project our image as bossy and bold but just wanted to clarify that we aren’t arrogant! It’s self-confidence, not arrogance at all!  And another thing we Aries would want to elucidate as well is that it’s unlike we love picking up fights but it’s just that we are on the point and direct. In another word, we aren’t sweet talkers but we tell what’s in our hearts straight without sugarcoating them. We are naturally honest.

Don’t tell me the food crop in your mind when you think about me. Yeah Yeah, I am a foodie, but could all of you put things in classier terms such as ‘Food Connoisseur’ as Venus’s significator of pleasures & comfort rules my sign which is why I have this tendency to seek comfort & pleasure in foods?

Anyway, please don’t confuse our tenacity with our stubbornness. And please do understand that we have this never giving up attitude which might portray us as being fixated on our opinions and refusing to give in to an argument but looking forward to your kind understanding that we, Taurus have this innate perseverance and never giving up attitude behind that illusive stubbornness.

Things to be confessed Yes, I have spilled the tea and don’t mind being tagged as the leader of the gossip gang. However, the truth all of you need to brain tattooed is that Mercury-significator of communication is the ruling planet of mine which is why I am gifted with eloquent traits, and playing with words seems to come naturally to me. And I truly take pleasure in interacting with people and it infuses me with passion when I am conversating with people around including strangers too. Truly, there is not only an exchange of words but laughter, and joy as well in conversation. And that’s the fun part of why I love gossiping, I mean, interacting!

And though I am misunderstood as being hypocritical or two-faced to whom can’t be trusted, let me present my thoughts here that we are like yin and yang or day and night. And I know each of us does possess such ephemerality but we-GEMINI are just vocal and more courageous to show that side each of us has.

Why am I hearing our Cancer baby saying out loud that “I am NOT CRY BABY!!” yet while crying? Yes, you are not CRY BABY, Cancerian but so empathetically enriched as Moon-the planet of emotions and nurture ruling the Cancer sign does make Cancerian that you can deeply feel others’ sentiments and emotions that you end up feeling it as if it’s yours. Truly, Cancerians are nurturing souls. So, next time, any one of you runs into a Cancer baby, let’s refrain from stereotyping them as moody and crybabies but understand they are so precious we need to appreciate them for being so empathetic to others’ feelings.

The name is sufficient for you all to know about me that I am the LEO-the King! That said, I am not trying to sound egoistic here, and neither do I die for praise, attention, and compliments like those sorts of stereotype people have about me. For me, Love & appreciation are always of preference which is why it’s just that I want to reside in the realm of compassion, love, and appreciation.

Hmm…to put in one sentence about who aren’t Leo and who are they, they aren’t needy, people pleasers, and attention seekers but they are just Love seekers. Sending lots of love to all Leos out there!

I had this bad rap for being overscrupulous or nitpicking but my nature is such that I can’t settle for anything lesser than PERFECT. And it’s my nature to strive for perfection in everything that I partake in does make me go granular on things which is why minor faults are easily visible to me so I end up pointing them out but indeed never with the intent to pester anyone but work on the faults and strive for perfection. And by the way, as perfectionism governs me even with those with complaints about me as being pedantic, I am grateful for those comments & complaints as I am taking those complaints as constructive criticism to perfect myself.

Librans would be shouting out loud inside that don’t treat us as doormats just because we keep quiet as we don’t want to rock the boat and most importantly, we value peace, harmony, and equanimity around. Anyone of you isn’t allowed to walk over us just because we cater to harmony and order, not EGO.

Enigmatic vibes would you get when you are nearby Scorpio as s/he never wears her/his hearts in their sleeves but once Scorpio let you in their life, you will experience heaven on earth with their undying loyalty and nurture. So, hear out what Scorpio would want to know about them is that we could ooze mystery but we aren’t unapproachable. Still, it’s just that we tend to take our own time before we open up to others because this is just how things work out for us. We might have a tough facade but we are softies at heart.

And by the way, we couldn’t miss out on the stereotype Scorpion has for their dangerous anger. And Scorpio would probably hate to explain why they are in ire but want a space while they are in rage. Scorpions feel everything intensely yet have that tendency to bottle up their own feelings which is why at times can burst out in anger.

We Sag are companionable but please, for god sake, stop misjudging our amicable nature as of we are trying to get around or something. This is our statement that We are Just being Friendly, not Flirty. Don’t confuse the Two. And for being branded as we are “Commitment Phobic” in a relationship, it’s just that we have an insatiable desire to explore the seemingly unexplorable and we enjoy the element of independence & adventure in life which is why we fear being in a relationship would end up as bondage and cost our independence from life.

Saturn-the cold and secretive planet rule the Capricorn sign thus imparting them with a cold, aloof, and melancholic exterior. Nonetheless, if anyone is to walk in the shoes of Caps, people would find out that they put on a mask and keep a neutral face quite a lot. They truly are the epitome of the idiom: don’t judge a book by its cover as it’s just that they don’t reveal their sorrow and hurts. They aren’t emotionless and cold, infact, they are choosing to not express it. Regards to them being stereotyped as disciplined and married to their work, Caps would have defended themselves with the statement

Yes, we are workaholics but that’s just the tip of the iceberg. If you look bottom of the iceberg, you would know why we act so. And it’s the obsession with our ambition to achieve them anyhow. And respected late Dr. Abdul kalam’s quotes on dreams do resonate with us better than ever “Dreams aren’t those we see in sleep, it is the things which don’t let you sleep.” So, how don’t we have the right to be workaholics when the fire inside is never extinguishing one that can’t let us sleep or rest? Truly, work isn’t a task but an extension of us.

Everyone who is reading this, Aquarians want to tell you that we aren’t aloof but we value solitude in life and we aren’t eccentric it’s just that nature has gifted us with visionary and thinking that is outside of the box so we are sorry we can’t limit ourself in the conventional way of living as of the majority does. We thrive in breaking the conventional way of living. Last but not the least, We are not rebels without a cause!

Yeah, we are daydreamers which we can’t deny and we are sorry but not sorry for zoning out in our land of fantasy & imagination while you were communicating with us in the background but Albert Einstein said it so true “Logic will get you from A to B. Imagination will take you everywhere.” And I love the feelings of transcendence and getting lost in my wilderness of imagination and swimming deep into that deeper ocean called “fantasy” where everything is perfect-beyond explanation! By the way, I would object to those stereotypes of being detached as it’s just that I value solitude and spirituality deeply in life that could give off my image as being detached but in a deeper sense I feel we all are deeply interconnected.